What is National Catholic Schools Week?

Since 1974, National Catholic Schools Week is the annual celebration of Catholic education in the United States. It starts the last Sunday in January and runs all week, which in 2017 is January 29 – February 4. The theme for the National Catholic Schools Week 2017 is “Catholic Schools: Communities of Faith, Knowledge and Service.” Schools typically observe the annual celebration week with Masses, open houses and other activities for students, families, parishioners and community members. Through these events, schools focus on the value Catholic education provides to young people and its contributions to our church, our communities and our nation.

Celebrate the following daily themes and celebrations in your (arch)diocese during Catholic Schools Week 2017.

Sunday – In Our Parish
Catholic schools benefit all year long from the religious guidance, prayers and support parishes provide. Many parishes join in the National Catholic Schools Week celebration by devoting a Mass to Catholic education. Schools start the week by inviting parishioners and community members to parish-centered events and school open houses that feature their outstanding academic programs, religious education and service opportunities.

Monday – In Our Community
A central aspect of Catholic education is learning the importance of service to others. When students take part in service activities—both local and beyond—they demonstrate the values and faith they gain through their Catholic education and learn how to make the world a better place. When they observe how others serve the community, they gain an appreciation for how they can continue to serve others their entire lives.

Tuesday:  Celebrating Your Students
Schools celebrate students during National Catholic Schools Week by planning enjoyable and meaningful activities for them and recognizing their accomplishments. They encourage students to reflect on the benefits of Catholic education and how the grounding in faith, knowledge and service it provides will help them throughout their lives.

Wednesday:  Celebrating the Nation
On National Appreciation Day for Catholic Schools, students, families, educators and other Catholic school supporters communicate the value of Catholic education to government leaders. They share information with leaders on the significant contributions Catholic schools make to the nation and their role in preparing students to be good citizens. They pray for the nation and recognize all those who serve it.

Thursday:  Celebrating Vocations
By focusing on faith, knowledge and service, Catholic schools prepare children to use their God-given talents to the fullest later in life. National Catholic Schools Week offers an opportunity for students to explore the many life paths that enable them to use their talents well in the service of God and others — by answering the call to a religious vocation, by nurturing a family through sacramental marriage, by volunteering in church activities and charities, and/or by pursuing a career that makes the world a better place.

Friday:  Celebrating Faculty, Staff and Volunteers
On this day, schools will honor teachers and principals as well as administrators and staff who support them in their important work and thank the parents, grandparents, alumni, parishioners and school board members who provide volunteer service.

Saturday:  Celebrating Families
Parents, guardians and other family members play a vital role in Catholic education. Not only do they volunteer at the school, they instill values and expectations for academic excellence in their children at home. We acknowledge the role of families in Catholic education and celebrate their contributions to the success of our schools on the last day of National Catholic Schools Week and all year long. 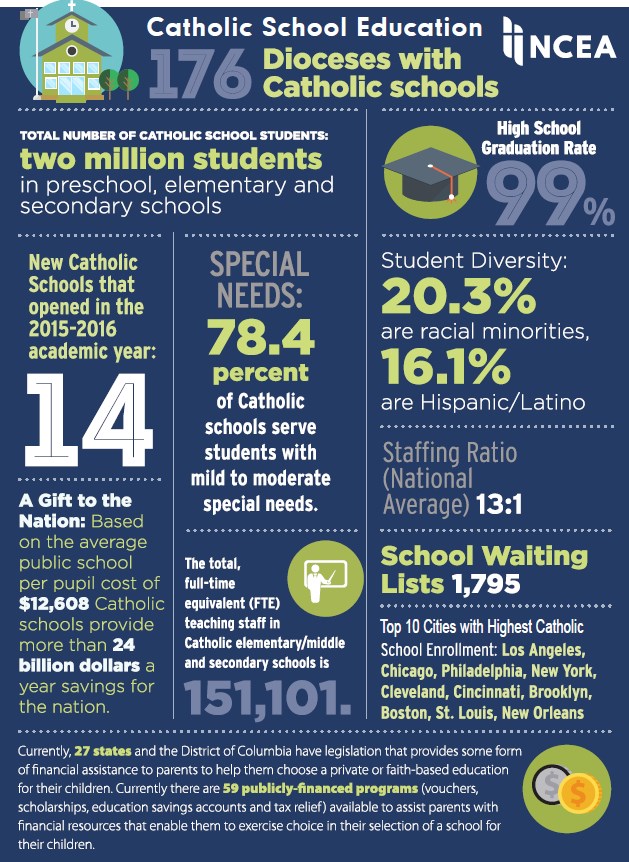 Good News for the Nation: Catholic Schools Are Thriving

The theme for the National Catholic Schools Week 2017 is “Catholic Schools: Communities of Faith, Knowledge and Service.” The annual observance starts the last Sunday in January and runs all week, which in 2017 is January 29-February 4. Schools typically celebrate Catholic Schools Week with Masses, open houses, and other activities for students, families, parishioners, and the community at large.

The logo and theme, developed for NCSW, was in response to member requests for a theme and logo that would last more than a year, the new theme will be used for at least three years. This will provide opportunities for schools to brand the week and their ongoing marketing activities with repeated mentions and use of a consistent logo.

The theme encompasses several concepts that are at the heart of a Catholic education. First, schools are communities—small families in their own right, but also members of the larger community of home, church, city and nation. Faith, knowledge and service are three measures by which any Catholic school can and should be judged.

The logo features a swirl of colors interacting around a cross, which is at the center of all Catholic education. The vibrancy of the colors and the movement and shadows in the logo portray the inner-connectivity and community life that are present in our Catholic schools.

Blessed Trinity Catholic School will not discriminate on the basis of race, color, gender, sexual orientation, or national and ethnic origin in the administration of its educational policies, admission policies, financial aid and loan programs, athletic programs, and other school programs.